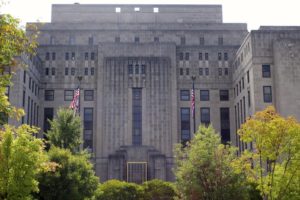 Then you will need to determine how much the house is worth. Usually this can be done by looking at the fair market value of the home. It is also important that you and your spouse come to an agreement on what both of you think the fair market price of the home should be. It is important that you come to an agreement because it is likely that if the house is sold, that the profits will end up being split between you and your spouse. However, if a judge decides that one spouse will keep the house, that spouse may be responsible for paying the other spouse for half of the value of the house.

Generally if the divorce is an uncontested divorce in Jefferson County, it is likely that the spouses have already come to an agreement as to what will happen to the marital property after the divorce. When a couple can not come to an agreement on who gets the house, the divorce will be contested and the couple will have to go to court to let a judge decide. If you cannot decide on what to do with the house after the divorce, it will likely be much more costly to go to a court and dispute over who gets the property.

There are a number of factors that a judge must consider when deciding who will get the house in the event of a divorce in Calhoun County. One of the main factors to consider is whether the house was bought by one spouse before the marriage, or if the house was bought jointly during the course of the marriage. The judge will also look at how much each spouse has actually contributed to the house. If one spouse has contributed significantly more to the house then it is more likely that a judge would consider awarding the house to that spouse.