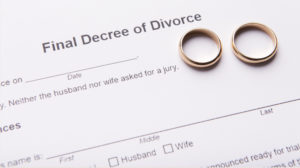 With an easy uncontested divorce, much of the work can be completed between spouses, and with minimal involvement of their attorneys. The significant areas that they need to work on are the division of assets, alimony, child custody and support, and other similar issues. This is one of the main differences between contested and uncontested divorces. In a contested divorce, the lawyers do all of the negotiations instead of the spouses.

From the initiation of the divorce process to the settlement stage, if couples are not in agreement with one another they will have to deal with repeated visits to the courtroom. Courts will deem a divorce as contested, and not uncontested, when couples can’t agree on the major issues of their divorce, if one spouse wants a divorce while the other does not, or if one spouse wishes to file a fault-based divorce and the other wants to file using the state’s no-fault designation.

With an uncontested divorce, court visits are kept at a minimum, to the extent that paperwork needs to be filed with the court clerk and the judge signs off on the divorce when all agreements and paperwork have been satisfied.

As previously mentioned, a contested divorce is where couples cannot agree on how to settle the major areas of their divorce. This includes but is not limited to alimony, division of property, child custody, and child support. When couples cannot come to an agreement on one, several, or all of these issues, then it will fall to the judgement of the court to complete this work for them.

For couples pursuing an uncontested divorce, they are able to work these issues out between themselves, or with the assistance of a divorce attorney or mediator. This process is usually completed early on, but it can take some time to resolve matters.