Our Hoover bankruptcy attorneys currently charge flat fees to file most Chapter 7 bankruptcy cases in Jefferson County and the surrounding areas.  Should you, like many other Americans, be overwhelmed with debt, then let our Hoover bankruptcy lawyers help you find financial relief and guide you through the process of bankruptcy.

Overwhelming debt is a common problem for people living in Shelby and Jefferson County, Alabama. If it is plaguing you and your family, then maybe we can help. For an initial consultation with our Hoover bankruptcy lawyer over the phone or in person in our office, you will need to fill out a questionnaire and bring it with you to the appointment.  Should you opt for a phone consultation, a Hoover bankruptcy attorney is available to speak with you today to review your financial circumstances. If you need a bankruptcy attorney in Tuscaloosa or the surrounding areas of Helena, Chelsea, Alabaster, Pelham, Birmingham, Hueytown, Homewood, or Vestavia, then you will likely be filing your bankruptcy in the United States District Court, Northern District of Alabama, Southern Division. In a Chapter 7 bankruptcy, you will have a hearing called a Meeting of the Creditors. If you live in the City of Hoover or anywhere else in Jefferson County, then your bankruptcy hearing will be in downtown Birmingham.

To proceed with filing your bankruptcy, certain documentation will be needed, depending on the specifics of your situation.  We will typically need at least last two years of tax returns and the last six (6) months of your income information via paystubs.  After reviewing these and other documents, our Alabaster bankruptcy lawyer can help you determine if bankruptcy makes sense for you.

If filing for bankruptcy  then will usually be filing a Chapter 7 or Chapter 13.  A Chapter 13 bankruptcy is basically a three to five year payment plan that is administered through the Bankruptcy Court, where you pay your creditors off over time allowing you to get caught up on certain important bills such as your mortgage or a car payment.  However, when most people think of filing bankruptcy they are thinking of a Chapter 7 bankruptcy, which is a much quicker and simpler type and usually last about ninety days.

Filing a Chapter 7 bankruptcy can eliminate much, if not all, of your unsecured debts in a very short amount of time.  However, you must qualify for a Chapter 7. There are certain income based tests that must be performed in order to determine if you qualify and your last six months of pay stubs or other proof of income for the last six months is required in order to make this determination.

Once your bankruptcy case is filed, whether a Chapter 7 or 13, you will have to go to something called a Meeting of the Creditors or 341 Hearing.  No creditors usually show up for this meeting and it is meant as an opportunity for the Trustee in your case to ask you a few questions under oath.  One of our Hoover or Bessemer bankruptcy lawyers will be there with you for this meeting, and it usually consists of the Trustee in your case asking a few simple questions.  The United States Courts are divided into divisions and districts, with Birmingham being located in the Northern District of Alabama, Southern Division. If you live in Hoover or any other city in Jefferson County then this meeting will likely be at the Federal Courthouse in downtown Birmingham.

How Much Does Filing for Bankruptcy in the Hoover Area Cost?

We currently charge flat attorney’s fees for Chapter 7 bankruptcy cases throughout Alabama with our Hoover bankruptcy lawyer.  This includes most Chapter 7 filings, but additional costs might be incurred should there be any complex legal issues such as corporate, divorce, or other such issues that would require a significant amount of additional time to handle or are likely to involve hearings. 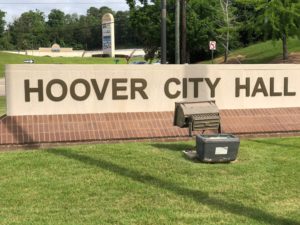 However, there is always a filing fee that the court charges as well fees for pulling your credit report and tax returns. There are also two courses (a debt management and a credit counseling course) that you must complete and pay their fees too. Therefore just give us a call and our Hoover bankruptcy attorney can give you the total amount needed to file a Chapter 7 bankruptcy with us.

While a Chapter 7 bankruptcy can be beneficial to you in potentially absolving you of your obligations to your unsecured debts, sometimes another type of bankruptcy called a Chapter 13 would work better for you.  A Chapter 13 case is cheaper to file due to the fact that most attorney fees get paid in the five year payment plan, so there are less costs up front.  When you call our Hoover bankruptcy lawyer for a consultation, we will review your situation and help you find the best option.

The Harris Firm regularly files bankruptcy cases in the Northern District of Alabama, Southern Division and are familiar with the local requirements.  Our Hoover bankruptcy lawyer is a member of the Central Alabama Better Business Bureau and the local Birmingham Bar Association, and he is usually the attorney that meets with potential clients in our Birmingham office.  If you need some financial relief then give our Hoover bankruptcy attorney a call today for a consultation in person or over the phone.

Bankruptcy was created to give individuals and entities an opportunity to have get financial relief, potentially get a fresh start by resolving their serious debt issues. For example, by filing Chapter 7 you could eliminate... Read more

We charge $1050 for our attorney fees in most simple Chapter 7 cases.  In addition to this, there is a court filing fee that is $335 in a Chapter 7 bankruptcy. There is also a $30 fee to pull your credit report and incorporate it into... Read more

Other than the creditors and persons you tell, it is unlikely others will know that you filed.  It is public record, but not easily accessible by the general public.  Some possible exceptions to this would be if... Read more